William Parks of Openshaw (who?) 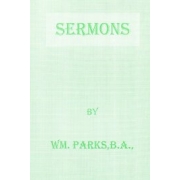 Manchester was certainly blessed with some faithful ministers of the gospel during the years of its growth from a village to a city in the 1800s. If William Gadsby can be pointed out from among nonconformists, yet another William could be named from the established Church: William Parks. He was rector of St Barnabas at Openshaw in Manchester from 1843 until his death in 1867, and noted for his strong, positive preaching and devotion to his people. This book of sermons contains a memoir by David Doudney, editor of the 'Gospel Magazine' at the time of his death.
Here is a book of bland appearance; it could not be more different from the style and substance of Parks' preaching! He was clear and bold because he knew what he believed, and said it. One thing I find striking about these sermons is their conciseness. Granted, they are his written notes, but he clearly crafted them to accommodate the short attention span of the average person among his poor parishioners. This also happens to mean that they suit a modern readership! None are more than 2 - 3 pages long. There is variety here also - 60 sermons to go at, from The New Birth to a series of 9 going through the Epistle of James. If you thought old sermons never make for good reading, think again and try these. 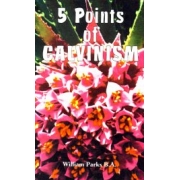 Now this cover goes to the other extreme... But leaving that aside, William Parks preached the sermons in this book during Lent 1856. They were republished in 1915 (by the Sovereign Grace Union I believe), and are still in print. This slim paperback contains a sturdy defence and proper explanation of the '5 Points'. Its continuing usefulness lies in Parks' great ability to fit a lot into a short space. He ably anticipates serious objections to these Calvinistic doctrines and disposes of them one by one.
Both these books are now only available new in the paperback editions printed by Gospel Mission Books. We distribute exclusively for them in the UK.

'Sermons by Wm Parks B.A.' costs £6.95, and the '5 Points of Calvinism' is £4.50.
Should you want more of William Parks, then for £7.50 you can get a further book of gospel sermons appropriately called 'No Uncertain Sound'. Go to
http://www.christianbookshopossett.co.uk/product.php?&code=2959&
Jeremy
Posted by Christian Bookshop Ossett at 23:45