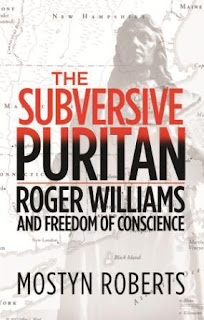 Perhaps this is not the most colourful re-telling of what must have been a very colourful life. But it is a thoughtful biography, in which Mostyn Roberts considers what Roger Williams' life and belief have to say to present day Christians. He had to find answers to important questions which divided opinions among godly people - and still do. Should the church aim to gain civil power? Does it seek freedom of conscience for itself alone among the different faiths making up society? Should it be expected that Christian observances and values are enforced by the powers that be? Williams wrestled with these issues both before and after embarking for New England, where Puritans had sought a new home and a fresh start free from interference in the mother country. He found that, sadly, the persecuted soon became the persecutors. Thus he was eventually banished from Massachusetts for his views on the separation of church and state, which entailed tremendous hardships for him and his family as it was winter at the time. But he was a true pioneer, first in going out to find a place to settle, and then in helping to establish a new colony, Rhode Island, and ensuring that its charter was the first in the world to protect full liberty of conscience - for all.
Williams has been rewarded with a statue at the Reformation wall in Geneva, yet all too few know of him today. This book goes a long way to put that right, and throw light on a man of uncompromising integrity - yet so as to show him as Cromwell desired to have his own portrait painted - 'warts and all.'
The Subversive Puritan. Roger Williams and Freedom of Conscience by Mostyn Roberts, published by EP Books, £9.99.
Posted by Christian Bookshop Ossett at 12:54