Human Rights and the Christian - A Review 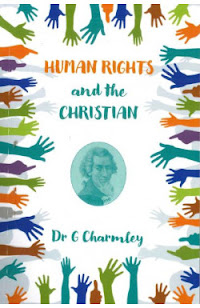 The notion of human rights, that is rights which are owed to people purely by virtue of their humanity, is one which has in the space of a few decades grown from obscure legal jargon to become a common phrase in political and moral debates. Dr. Charmley’s book usefully shows how these rights do not, as many people claim, originate from enlightened secular values, but have their foundations strongly in Christian doctrines. He details the emergence, growth and effect of human rights by moving through history, with a particular focus on the development of rights in the French Revolution, campaigns for civil and religious liberties in Britain, and the American movement for civil rights, though the Ancient world and the Reformation are by no means neglected. One possible criticism is opened up by this tour through history – that there is a lack of depth about specific events, and too much history is addressed in too little space. Despite this, Dr. Charmley writes as an expert historian in analysing history, while the intention of the book as a summary of the Christian approach to human rights means that any further depth of description would dilute its focus.

This brings up perhaps the most useful part of this book – as a discussion of the attitude of the Christian to the concept and language of human rights. Its abuses are also focused on, especially ‘rights inflation’, the growth of victim culture, and when rights are used against Christians. As he says, ‘the concept of human rights is a noble one, being based upon the idea of equal respect for all human beings. It is, however, a concept that has become corrupted, and may well become more corrupted still. This should be no surprise to Christians, believing as we do in a fallen world’ (p. 263). Yet he argues that the Christian should largely be supportive and encouraging of human rights, though not to the excesses of the modern world, remembering they have their foundations in Christian doctrines of benevolence and equality. He raises the important point that human rights ultimately serve to protect the free exercise of Christian worship, though that this liberty has only been possessed for ‘little over a century’ (p. 265).

Dr. Charmley also brings attention to Particular Baptists in history, and their role in campaigns for religious liberty and against poverty, evoking such figures as William Gadsby and John Kershaw when arguing for the need for the Church to be ‘concerned with the rights and duty of man insofar as this is necessary for her existence and relative comfort, and the comfort of our fellow creatures, … but let us not forget that the mission of the Church is to preach the gospel of God’s grace to sinners’ (p. 267). This book is invaluable for all those questioning what the approach of the Church and Christian should be to the idea of human rights, and how they should be regarded when it so often seems that they are marshalled against Christian beliefs.

Posted by Christian Bookshop Ossett at 14:01