Thomas Clarkson - The Giant with One Idea

12th May 1789 was the day that William Wilberforce made his first speech in parliament against the slave trade. He spoke for three and a half hours! Today therefore seems a fitting day to post a review of the latest Trailblazer book about Thomas Clarkson the abolitionist who worked closely with Wilberforce. 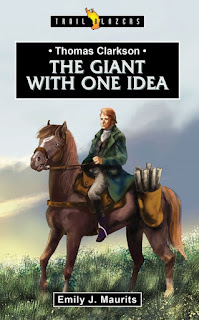 Thomas Clarkson: The Giant with One Idea

The campaign to abolish the slave trade was motivated by Christian ideals, its arguments presented in Christian language, and, above all, with committed Christians as its leaders. Of these, William Wilberforce, the great abolitionist MP and the campaign’s leader in Parliament, is the most well known. Yet just as important, though sadly overlooked (especially in Christian writing on abolition), was Thomas Clarkson. As this book details for a younger audience, he drove the campaign and turned it into a pioneering popular movement, gathering evidence, witnesses, supporters and petitions. The reader gains a vivid sense of the difficulties this involved, the many dangers and disappointments along the way, Clarkson’s illness and partial retirement, and the crowning triumph when abolition was finally achieved in 1807. His work continued after this, pressuring the government to force other countries to abolish their slave trades. Clarkson also took part in the campaign against slavery itself, although less focus is afforded to it here, which was successful in 1833. Despite this, what is presented is the picture of a dedicated man, committed to helping the downtrodden and oppressed and motivated in this by his Christian faith. It is written in a slightly fictionalised style to engage children, but will be of benefit to parents and young ones alike for discovering the life and oft forgotten efforts of Thomas Clarkson. It is only to be lamented that there is no full length, modern biography of Clarkson for adult readers.

There are some, though no major, historical inaccuracies in this book, primary among them the attribution of the pamphlet encouraging the boycott of sugar mentioned on p. 97 to the Whig MP Charles James Fox (erroneously referred to as Lord Fox at points). This pamphlet, entitled An Address to the people of Great Britain, was in fact authored by William Fox, a printer who attended James Dore’s Particular Baptist chapel in Maze Pond, London (itself a hotbed of abolitionism, with Dore preaching against the trade in 1788). The date of abolition is also given as the 24th February 1807, the date of the second reading of the Bill in the House of Commons, rather than the 25th March, when the Bill was given Royal Assent. However, these minor errors should not detract from the enjoyment that will be found reading this book. The small section on modern slavery at the end reminds the reader of the continued existence of this most inhuman of institutions, and it is to be hoped that the life and efforts of this most important of figures will inspire us both to look back to the valuable lessons of the original anti-slavery campaign, and apply these to the similar issues faced today.
Matthew Roe
Thomas Clarkson: The Giant with One Idea, by Emily Maurits, published by Christian Focus Publications, £5.99
Posted by Christian Bookshop Ossett at 11:08