"Salvation is, from its beginning to its end, a mighty wonderwork of God, no less marvelous, and therefore, no less divine, than the work of creation. It is that wonderwork of the Almighty by which He calls light out of darkness, righteousness out of unrighteousness, everlasting glory out of deepest shame, immortality out of death, heaven out of hell! It is the wonder of grace, whereby God lifts an accursed world out of the depth of its misery into the glory of His heavenly kingdom and covenant. That work is absolutely divine. Man has no part in it, and cannot possibly cooperate with God in his own salvation. In no sense of the word, and at no stage of the work, does salvation depend upon the will or work of man, or wait for the determination of his will. In fact, the sinner is of himself neither capable nor willing to receive that salvation. On the contrary, all he can do and will is to oppose, to resist his own salvation with all the determination of his sinful heart. But God ordained, and prepared this salvation with absolutely sovereign freedom for His own, His chosen ones alone, and upon them He bestows it, not because they seek and desire it, but in spite of the fact that they never will it, and because He is stronger than man, and overcomes the hardest heart and the most stubborn will of the sinner. He reconciles the sinner unto Himself; He justifies him and gives him the faith in Christ; He delivers him from the power and dominion of sin, and sanctifies him; He preserves him. All this belongs to the wonder of salvation, which is accomplished through sovereign grace alone." 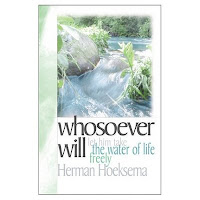 Herman Hoeksema
Quoted from the first chapter of 'Whosoever Will'
published by RFPA, £8.95
Lorna
Posted by Christian Bookshop Ossett at 23:10