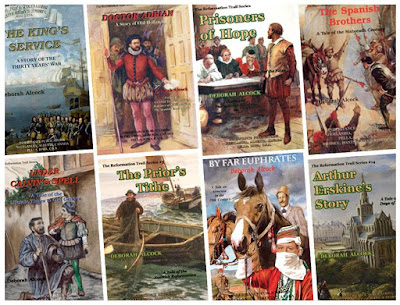 If you follow any of our social media pages (go on, you know you want to - see below!), you will have noticed that we recently had a big consignment in from Inheritance Publications.
Inheritance is a small family publisher in Canada with a focus on Dutch Reformed literature and excellent sound historical fiction for children and adults. We have taken on a lot of new titles, so keep checking the website as it might take us a while to get them all listed. Deborah Alcock, Hesba Stretton, Amy Le Feuvre, Piet Prins, Deborah Meroff and Marjorie Bowen are just some of the authors we have expanded our range of. Many of these are reprints of excellent books long since forgotten.
The team here at the bookshop (young & old) have started on many of these books (purely so that we can give informed reviews of course 😉), and here is our first recommendation:-

The King's Service by Deborah Alcock.

'If you’ve never read one of Deborah Alcock’s accurate historical novels, this is a great one to start with. It is much shorter than many of her thick tomes, and is full of adventure, romance, plot twists, historical facts and God’s amazing grace worked out in the life of sinners.
The opening scene is set in Scotland during the 1630s, while the 30 years religious war is being waged in Central Europe. Uncle Charlie is ward to his brother’s two children, apparently orphaned after the death of their mother and presumed death of their father. Grief stricken, Hugh Graham had left Scotland and his ‘bairns’ to join the Protestant cause in battle, which was being led by Gustavus Adolphus, the king of Sweden. Nothing had been heard from, or of, Hugh Graham for 8 years.
Restless and easily led, Uncle Charlie is persuaded to go and also join the army of Gustavus Adolphus, now in Germany. The Protestants were gaining ground over the Imperialists ‘the rage of Rome’. The young Hugh of 12 years and Jeanie of 14 years, his nephew and niece, join him in different capacities as he leaves his beloved Scotland behind.
The rest of the story follows each one of them in their diverse providences. The sensitive, faithful and God-fearing Giovanni and her key friendship with Fraulein Gertrud Von Savelburg. Young Hugh, full of life and completely unaware of the ‘intrigues of Rome’ conspiring against him. And Uncle Charlie, who displays bravery and loyalty never attributed to him before, and who is brought to a confidence in the God for whose cause he is fighting.
To say more, especially to divulge some of the unexpected plot twists, would spoil this page-turner for any future reader. A recommended, perfect holiday read.'