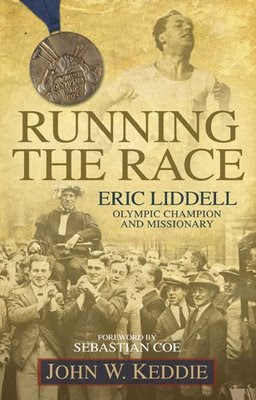 Because of the Olympic Games during this month, I thought that it would be a good time to focus on books with the theme of Christians and sport. This immediately digs up the old bone to chew over again - should Christians be involved in sport? It is closely connected with considerations like use of time, and what constitutes worthy entertainment - if in fact such a thing exists. Is it OK to participate in sport, but not be a spectator? Or are both merely forms of modern idolatry? If you have a talent for a particular sport (or indeed any other natural gift, from playing the piano to lion taming) then should you see it as God-given to use anyway, or only if you can clearly see how it can be employed for his glory? So many questions! So many opinions!!
One book I have featured was blogged on by me when first published. 'Running the Race', a new biography of the Olympic legend Eric Liddell. It is pleasing to learn that a translation of it has been given the permission of the Chinese Government to be distributed in China during the period of the Beijing Games. Well done Evangelical Press!
Perhaps the worst development in sport is professionalism. It drives the win at all costs mentality. It may increase standards, but mostly reduces the concept of sportsmanship and healthy enjoyment. It also brings great pressure along with the crowds of spectators. So I have also featured a book called 'Stress: Sources and Solutions' from a Christian viewpoint by a former Consultant Psychiatrist. I haven't read it in detail, but it obviously deals with a whole range of reasons for stress. Like me trying to shoehorn in this blog to introduce my August choices between decorating the bedrooms at home and testing a new stock and invoicing system at the bookshop. Must dash to get the dust sheets off our bed before sleeping in it!
Jeremy
Posted by Christian Bookshop Ossett at 21:17