The inaugural New Focus Conference was held over the past weekend in idyllic surroundings. Teesdale really is a lovely spot, and more so because it is often overlooked by tourists in favour of the better known dales further to the south. Somewhat a metaphor in fact for the conference itself. We just went up for the Saturday sessions to supply the bookstall, but it appeared that few local evangelical churches supported it. We counted 45 people, many of them from quite a distance. What is the organiser Peter Meney's crime? Is it that his 'New Focus' magazine has become synonymous with George Ella and his campaigning ways? Perhaps, but he deserves a voice. Like him, loathe him if you will, but at least engage with the research he does even if you don't like his conclusions. Leaving aside such things, Peter and his wife Jill did a great job of organising the conference down to the last sausage roll! Thanks again you two.
The (loose) theme of the conference was 'Salvation, past, present and future'. Re the past, George Ella presented an historical paper in two parts. He focused on a few individuals from the North of England who have been influential in the spread of the Gospel while this country was in its formative years. Indeed his opening thesis was that the true gospel arrived on these shores in the north long before Pope Gregory sent Augustine to 'convert' the heathen Saxons. He moved on to highlight the Venerable Bede and then Alcuin before devoting much time in the second part of the paper to John Wycliffe (from Teesdale!). Wycliffe was compared in some respects to Luther, and shown to be a great reformer. His sound biblical views were expounded, which are much less recognised than his bible translation work itself. I'd like to go on and read more about his views now.
In between George Ella's contribution a slot was given to Ken Cotty. He preached a sermon which I only got tantalising bits of, due to surpervising the children in a side room. It was an uplifting message on the future for the true christian and was well received. Lorna and I necessarily had to 'dip' in and out of sessions for the children's sake, but after a meal freely provided, we were all together for the final part at 7pm. Don Fortner (Pastor, Grace Baptist Church, Danville, Kentucky) preached a short sermon and set forth the gospel in his usual dogmatically God-honouring manner. All in all, we felt it was a very heart-warming and stirring conference. Heavy rain was the only dampener as people finally dispersed (and the lost hour!)
NB. New Focus can be obtained from us or directly from the editor Peter Meney http://www.go-newfocus.co.uk/
Evangelical Press have printed a number of books by Don Fortner, as well as Go Publications. All are obtainable from us.
Jeremy
Posted by Christian Bookshop Ossett at 22:05 No comments:

Have Banner of Truth gone head to head with Christian Focus Publications (CFP) over this old favourite? These two books are both meaty hardbacks, both priced just under £20, both 2008 editions. So, how to decide which one to go for? Well, what you see is less than you get with the Banner one. They seem to me to have undersold themselves, in that Commenting and Commentaries is helpfully included after the lectures. It does lead to a book one and a half times thicker and greatly heavier than CFP's, but this is surely worthwhile. Both editions are fully re-typeset. I think Banner's is more traditionally styled, whereas CFP have gone for a slicker 'signature' look, fitting within their other books in the C H Spurgeon Classics range. So if all were collected it would look nice on the shelf. But I first read this book as a battered paperback, and thought it most useful off the shelf! In fact I think Mr Spurgeon is better in his lectures than in the pulpit...so having said that I will now quietly withdraw to my nuclear bunker and await the explosion.

Posted by Christian Bookshop Ossett at 21:47 No comments:

Thought I'd mention a customer's recommendation. She was very enthusiastic about the Sketches from Church History Student Workbook. Apparently her 13yr old daughter loves it. I have to admit, when the workbook was first published I had my doubts about it - 'workbooks' to accompany books just seems so (dare I say it?) American. Still, it has obviously pleased this customer. The workbook is an 18 week course syllabus with questions, charts, timelines, maps, puzzles and essay topics following each chapter from Sketches. Ideal (so the blurb states) for Christian Schools and Home Educators, although it obviously has a wider appeal as my customer doesn't fit into either category.

Sketches from Church History by S M Houghton, for anyone that doesn't know, is a very readable illustrated account of the history of the Church beginning with the early church, right through to the 19th Century Church. It is now into it's fifth reprint since being published in 1980 so it has been a very popular book - and justly so.
Lorna
Posted by Christian Bookshop Ossett at 21:55 No comments:

The Feet of Jesus 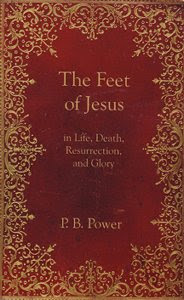 We seem to be overflowing with new books at the moment. This one caught my eye and so made its way home with me for closer reading. It was worth it.
P B Power was a minister in Leicester & Worthing during the 1800's. He spent the last 34 years of his life an invalid. Perhaps this contributed to his deeply experimental meditations. His writing is easy to read (a natural slightly rambling style) and devotional in nature. He analyzes various texts on the theme of Jesus' feet - the multitudes coming to be healed at his feet, Mary at his feet, his pierced feet etc.
Joel Beeke has written a recommendation on the cover of the book and he writes much more eloquently than I can so I shall quote him:
'The Feet of Jesus is a virtual manual of spritual growth; it pulsates with Christ-glorifying insight, spiritual comfort, and practical guidance. Power's book unveils as do few others the inestimable value of Jesus and His work both in His humiliation and exaltation. If you would grow in the grace and knowledge of Christ Jesus, pray for Mary's portion to sit at the feet of Jesus as you read this book.'
The Feet of Jesus in Life, Death, Resurrection and Glory. P B Power. £11.50 (published by Reformation Heritage Books).
Lorna
Posted by Christian Bookshop Ossett at 22:33 No comments: 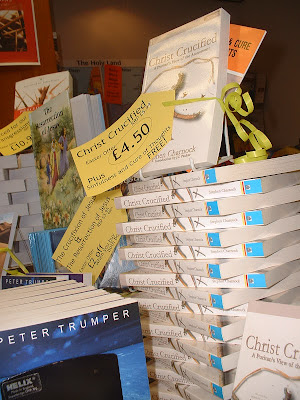 We've had to hit the ground running for our March promotion, because it's based around an Easter theme. I call it such for convenience' sake only, because the crucifixion and resurrection of Christ are of course central to the faith, and the gospel as a 'word of reconciliation' must be preached week in week out, all year every year. So please forgive the terminology.
We've made a careful, very focused selection of books, with something for every age group. You will see them from off our website homepage, or click
http://www.christianbookshopossett.co.uk/March%20Offers.pdf
These are books which we like and which we can do at prices so low you will still have change left over to buy all your easter eggs for the children (supposing you were going to anyway). In fact, I would go so far as to make a price promise - find them cheaper elsewhere, let me know, and I'll match it! Can't say fairer than that, even though my name's not Asda.
Jeremy
PS. If you live locally, don't miss our late evening opening before Easter on Monday 17th March. Tea and cakes, plus choc egg with every purchase (if I'm at the till) 7pm - 10pm.
PPS. If you wonder how on earth that pile of books in the photo stands up at its Pisa-like angle, remember there are 20 years of civil engineering experience behind me!

Posted by Christian Bookshop Ossett at 21:30 No comments:

A week ago today we were listening to classical music. Remember the name Gerard Le Feuvre, director of the Kings Chamber Orchestra. We were privileged to watch a live performance and receive a free copy of their album 'String Heaven'. He and his group outshone far more celebrated names at the conference banquet, both in grace and in ability. Whilst I don't perhaps share his view on what his music is all about, nevertheless christians can do music (and all the arts for that matter). This is somewhat different from a fully orbed belief in the concept of christian music, as if it were underpinned by biblical teaching and validated as a form of ministry. But anyway, well done Gerard!
Other good things: John Roberts (Day One) for a piece of pertinent advice; Tim Banting (IVP) for excellent knowledge of his books and almost bullet point communication of it (Get well soon, Tim); Not having to push a baby around the convention hall, and having a rare time away without the children, thanks to Lorna's parents! (but it's great to see them again all the same).
Ahh...It all seems a distant memory now.
Jeremy
Posted by Christian Bookshop Ossett at 11:17 No comments:

The Christian Booksellers' Convention had just a little extra buzz for us this year. For the first time we attended the Awards Dinner. This felt like the Christian Booksellers' equivalent to the Oscars! For us it was particularly exciting as we had been shortlisted for an award - 'Small Retailer of the Year'. So, we duely got dressed up and made small talk with the bigwigs on the table we had been placed on. The food was great, the company was less so (except of course for the dashing young man on my right commonly known as my co-manager) and the awards nerve-wracking. We sat nervously through numerous awards - 'Publisher of the Year', Reference Book of the Year', Children's Book of the Year' etc etc and eventually they reached 'Small Retailer of the Year'. By this point, we had watched a number of people very nearly break a leg on the way up or down from the stage and had listened to a number of 'thankyou' speeches (some short, some funny and some downright arrogant) and my heart was starting to pound at the possiblity that I might have to try and negotiate those steps and even worse, might have to say something once I got behind the microphone. Yikes! 'And the winner is ...' You probably won't believe me when I say that I was mightily relieved NOT to win the award! I think Jeremy's heart was also struggling to cope with the stress. Our congratulations go to Chris and Lyn Land who run the Christian Book Centre in Redruth for finally winning after 3 times being shortlisted. We didn't go away entirely empty handed. As one of the 2 runners up we were given an engraved paperweight to throw at each other, er, display in the shop. I'm sure an Oscar Trophy would hold no greater pride of place!
Lorna
Posted by Christian Bookshop Ossett at 20:13 No comments: