A Clearing of the Mists 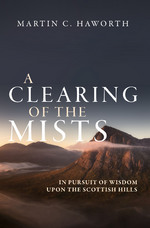 In Pursuit of Wisdom upon the Scottish Hills.

Martin Haworth is a previously unknown name to me, but he reveals something of his journey to faith in this deeply reflective book. His has been a varied life: brought up in Manchester (Mancunians beware page 31!), dropping out of University to a back-to-nature job in forestry in Scotland, but also at other stages working in business in the Middle East, then starting up a guesthouse in the Scottish Highlands, before feeling a call to missionary work in the Philippines. He has always had a passion for the great outdoors, and the mountains of Scotland have drawn him back again and again to them, not only to complete his round of the 'Munros' (all the peaks over 3000 ft high to the uninitiated), but also for spiritual reasons. He would be the first to refute the idea of valid spiritual experience deriving solely from lonely mountain fastnesses, without regard to the Creator of those wonderful high places, nevertheless here his soul has been refreshed in God. Out of these times he draws some twenty one chapters of 'guided meditations'. Their titles, such as 'Seeking Direction', 'In Adversity', 'Being Approved', and 'In Fear of Man' give a flavour of the topics he explores, relating them to particular ascents he has made on well known, and some less well known, mountains of Scotland (hand drawn maps helpfully included). Haworth has some great tales to tell: most of his walks were solo (not to be copied!) and many were in demanding but rewarding winter conditions. Hill walkers of all standards from pootlers to scramblers will respond to his enthusiasm for the wilds. It is good to come across a book of this type, which has a christian perspective on it, and aims at magnifying the glory of God as seen in his creation, as well as deriving lessons for life's pathway. The meditations and their applications are not all of the same quality: there is some navel gazing and some doubtful theology to be sure, but there is also much to chew slowly and thoughtfully on. Here is your invitation to create a 'mountain panorama' of your life (and draw it if you wish, see page 249!) Note: many Bible portions are quoted in full, unfortunately from the NIV.

'A Clearing of the Mists' by Martin C Haworth
Christian Focus Publications
£8.99 p/b

Jeremy
Posted by Christian Bookshop Ossett at 18:52 No comments:

Just occasionally, publishers get book covers horribly wrong. We all know you shouldn't judge a book by its cover, but we all sub-consciously do it.  So, we are very pleased to see that Sharon James' biography of Elizabeth Prentiss has a new dust-jacket. 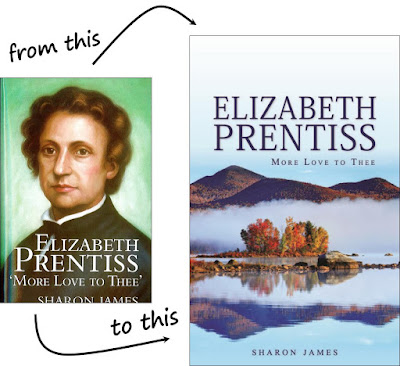 The contents have not changed and the price is the same, but because we still have a copy of the book with the older dust-jacket we are selling it cheaper. Instead of £15 you can have it for £10.  Use voucher code MORELOVE when you order online, or quote this code to order by phone/email.
Tip: The book without the dust-jacket looks great!
Go to Elizabeth Prentiss 'More Love to Thee' by Sharon James
Lorna
Posted by Christian Bookshop Ossett at 14:33 No comments: