Only a week until Mother's Day (3rd April). Don't forget to pick up a card, and this year instead of flowers and chocolates, how about getting her a book? Just ring if you need some help choosing! Lorna 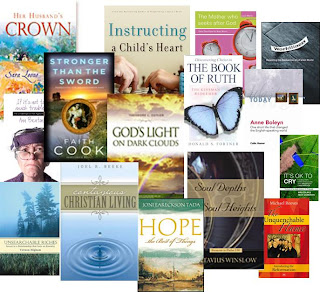 Posted by Christian Bookshop Ossett at 21:21 No comments:

It is a real pleasure to take good books where they are really appreciated.  This has always been the case at the New Focus Conference.  After doing a local bookstall at the Pennine Bible Witness last Friday evening, we went down to Gornal, near Dudley, West Midlands, for the day on Saturday. It was a tough schedule, but the Lord blessed us.  The driving conditions were ideal, the children were commendable, the books were mopped up by avid readers, and there was some good fellowship, ministry, and conversations.  Not to mention the excellent hospitality!  Where else in this country could you take books and easily sell edifying old authors like Robert Hawker and William Gadsby?  If you can tell me, I'd love to know!  Given half a chance, we would move heaven and earth to go, and count it a real privilege to do so.
Jeremy
Posted by Christian Bookshop Ossett at 11:15 No comments:

The Romance of Protestantism

This is a book that gripped me more as I went on, rather unexpectedly. Protestantism and romance are words which some would see as mutually exclusive. But as Deborah Alcock wrote this book a hundred years ago the word 'romance' conjured up different ideas then than now. It is to be understood in the sense of drama, thrilling heroism and true nobility. So the chapters of the book (which were originally given as 'talks') take in a broad sweep of church history in order to highlight these themes. This is done in a very informative way, and although somewhat coloured by the attitude of her era, it is also tantalising enough to make one want to know more about the people, events and circumstances. Fortunately this can be done by taking up her other books which, although strictly speaking are fiction, are more focused historically, eg. 'Crushed yet Conquering' (John Huss and Bohemia), 'Dr Adrian' (William of Orange and the Dutch Republic) etc. What I found of especial interest was what she handles here along the lines of, What is Protestantism anyway? The history of the name itself, and its meaning is excellently dealt with. It is always to be remembered as a testimony for the truth of the Bible, and not so much a protest against Roman Catholicism and/or Government policy. (ie. religious or civil powers). And so the ages furnish many examples of those who were willing to sacrifice all for this principle. It is very challenging, and makes the words of Romans 8:35-39 come searchingly alive.
The edition we sell is from the Canadian publisher Inheritance Publications and costs £8.00.
Jeremy
Posted by Christian Bookshop Ossett at 14:27 No comments: 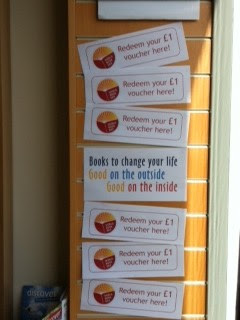 Though World Book Day was actually back on March 3rd, the good news is that you can redeem book vouchers all month. Most children will have got one by now, and they are worth £1 off any book. Strictly it is only applicable to books costing over £2.99, but we are generous here...we'll bring that down to £1.99. So you can get a good read for as low as 99p! What do we have at that price? Well, just for example, The Essential Bible Reference series from Candle is a great option for getting background helps to bible study, in a colourful and readable way. Matt went for one of these, so they are suitable for around 6 years plus, and I am not ashamed to dip in and learn either! Ignore the 11+ years tag on our website catalogue - that's dreamt up by Lorna! Just type in 'Bible Guide', for instance, in the Quicksearch box on our home page and Tim Dowley's book will come up. Click to get all the details and a picture of it, and then if you click on the 'Series' box a full list of all the others will appear. Bob's your Uncle. Go for it - http://www.christianbookshopossett.co.uk/ .
Jeremy
Posted by Christian Bookshop Ossett at 10:59 No comments:

It is now exactly 30 years since the death of Dr D Martyn Lloyd-Jones. He was a champion of expository preaching, but not dry, like so many that have tried to emulate him since. I think his Ephesians series is one of his best. It was preached on Sunday mornings between 1954 - 1962, and is available in an 8 volume set. Lorna and I found Vol 6, 'Life in the Spirit in marriage, home and work' of great profit in the run up to getting married (on that amazing day in August 2000!)
Vol 4, 'Christian Unity' is very applicable to today's christian world. It covers Ephesians 4:1-16 - the start of the more 'practical' second half of the epistle. However Lloyd-Jones shows that the vital doctrines defined earlier underpin the issues handled in this part of the epistle. One subject, of intense interest to churches and their members, is that of unity. The tragedy of the church by and large today is that it has placed unity above truth. Thus the ecumenical movement prevails, while at the same time it fails when examined by biblical testing. Lloyd-Jones correctly analysed the situation 50 years ago and it is only different today by being worse. I find these sermons are not too long, and engage without being taxing. They are bound in a good quality hardback by Banner of Truth, but with a forgettable dustjacket - hence no cover picture shown here! The price is £16, but if you get hold of us quick enough we have a copy of Vol 4 with a slightly faded spine on sale at half price.
Jeremy
Posted by Christian Bookshop Ossett at 15:43 No comments:

Another encouraging editoral in the New Focus Magazine...
"These few comments are for you who worship with only a handful of believers or are forced, by reason of conscience or convenience, to worship alone in your own home.
It has long been an encouragement to the saints that where two or three are gathered in God’s name, the Lord Jesus has promised to be there in their midst. Remember those who gathered on the hillsides of Scotland during the covenanting years, or met in forests of the Soviet Union for fear of the authorities. They did not meet without the presence of their Saviour.
Even where one worships alone the pledge of the Lord is, ‘Lo, I am with you always’ Matthew 28:20. Those who are housebound, or hospitalised, or even the prisoner in his cell, may be sure that invoking the name of the Lord in worship is not a vain exercise. His spiritual presence is with us to assist us in our worship, to comfort us when discouraged, to supply us with His grace, and to protect and preserve us from evil; which is a great reassurance.
Yet, there is more, if more be needed. Not only has the Lord promised to be with His people, but He does not come alone. When believers go to worship they enter spiritually ‘into the city of the living God, the heavenly Jerusalem’. There they join ‘an innumerable company of angels’. More, they are accompanied by ‘the general assembly and church of the firstborn’ which are ‘the spirits of just men made perfect’ (Hebrews 12:22-23).
When God’s people worship they immediately join a heavenly choir more numerous and melodious than any mega-church choral society. When they pray, eyes closed and concentrating on Christ, the empty seats next to them fill with fellow-worshippers of the Most High God. When the gospel is preached enthusiastically, warmly, and sincerely, the hearers are not the few familiar individuals dotted around the room. They are the massed church of the Firstborn, the general assembly of the Lord’s redeemed.
I always smile when our little congregation of a dozen souls sings Charles Wesley’s rousing hymn, ‘O for a thousand tongues to sing my great Redeemer’s praise.’ It may be that in this life you and I never actually get the opportunity to stand in a congregation of a thousand and sing our great Redeemer’s praise. But in a finer way, each time we pray or sing the praise of our Saviour we join a throng so numerous, a crowd of witnesses so joyful and glorious that our frail human minds cannot comprehend it.
If you find yourself alone next Lord’s Day morning, or if your congregation amounts to but a few faithful souls, do not be discouraged. Spread throughout the land are faithful friends just like you, meeting in small congregations or at home alone, whose fellowship in the gospel is yours.
As you sing, lift up your voice and remember the heavenly choirs with whom you make melody. As you close your eyes and pray, reflect that your thoughts are merging with those of a countless throng in the worship of King Jesus. As you listen to the gospel, remember you are only the most recent generation in a long line of saints for whom Christ preached is light, love and life."
See www.go-newfocus.co.uk for more like this.
Lorna
Posted by Christian Bookshop Ossett at 23:12 No comments: