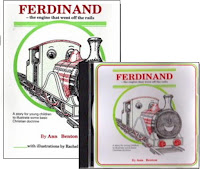 Recognise this?
Over the years we have had quite a few customers ringing asking about Ferdinand. This little story about a train called Ferdinand who struggles with doing what he is told and staying on the rails, aims to teach young children the great truths of sin and salvation. It was written episode by episode as the author Ann Benton taught her own children around the breakfast table. A song was also devised to impress these truths upon these young minds. Our customers usually remember having this on in t 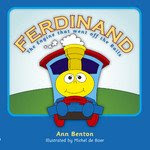 he car as children and now they are looking for it so that they can use it with their own children. Look no further! Christian Focus Publications have recently reprinted the storybook with the full text of the story (and new illustrations) and the song (including written music). They were unable however, to reproduce the CD because of copyright issues. But knowing that the music really makes the book we have obtained copies of the CD directly from the author so that we can still offer the book and CD as a set.
The new book costs £4.99 and the CD individually would be £2.50, but if purchased together the set costs £6.50.
Lorna
Posted by Christian Bookshop Ossett at 14:45 1 comment:

This is one book I have actually read thoroughly lately - in addition to the 'blokish' one featured by Lorna in the last post! It is generally a lot better than I first expected. The danger is that you dip into one part of it and reject it right away, especially if you are prone to look at the back first (strange how one does that automatically isn't it?) and hit the appendices. Perhaps I need to accept it's 'the American way', but checklists smack of an 'under the law' mentality to me. This actually contrasts with parts of the book which are firmly Christ focussed, and take on issues from a gospel perspective.
The fact is C J Mahaney, an American New Calvinist, has edited a book to which there are 5 contributors, all from within his Sovereign Grace Ministries network. It is on an important subject - one which all true Christians must recognise as having caused great corrosion in churches everywhere. Worldliness. Subtitle: 'Resisting the Seduction of a Fallen World'. Maybe many rightly diagnose this problem, but much that is written/preached presents the wrong solution. The tendency is to 'get stricter', to insist on the application of the Law of God. Now this is good if dealing with unbelievers, but the children of God are not to be saddled with that unbearable yoke again after being brought into soul liberty through Christ. So I welcome the chapter 'God, my heart and media' being dealt with by expounding and applying Ephesians 5:1-14 and other passages from the epistles. The one on music is on similar lines and pretty good, as is 'stuff' and material covetousness.
In fact Mahaney himself is about the nearest to poor in that he boldly opens up 1 John 2:15 in the first chapter, but is rather hamfisted with 1 Timothy 2:9 on 'Clothes'. There are some good pastorally inspired points appealing for Christian women to be less naive about the way in which they can make themselves sources of temptation for men by their dress (or lack of it!). However, men themselves do not seem to be dealt with so evenhandedly in this section. It gives a good twist that the final chapter is 'How to love the World'.
The real problem about a book like this is that the people who probably really need to read it won't, and those that (relatively) don't, will. How do you get over that hurdle?
Worldliness, ed. C J Mahaney. Published by Crossway at £8.99. Good value for a nice hardback.
Jeremy
Posted by Christian Bookshop Ossett at 21:17 2 comments: 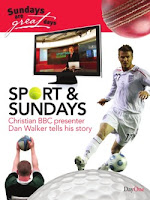 Anyone know Dan Walker? Anyone who's into Sport should do. He's a sports presenter for the BBC (Radio & TV). He's also a Christian and has just written his 'story' for DayOne which has been published in a large format magazine style booklet. Throughout his career Dan has remained strong in his belief that the Lord's Day is a day to be set apart for worship, and he has therefore always made it clear to his employers that he will not work on Sundays. This has not always made life easy for him, but he has been able to see the Lord over-ruling many difficult situations. I liked his practical outworking of his principles, and found the booklet an easy but still thought-provoking read. I imagine it will be popular amongst a certain male sporty set.
Sport and Sundays, by Dan Walker, published by Day One, £2
Lorna
Posted by Christian Bookshop Ossett at 22:04 No comments:

Books are being read very slowly at the moment - hence the lack of posts. I'm afraid there's just too much to do when you're staying on a farm in Wiltshire and the sun is shining... 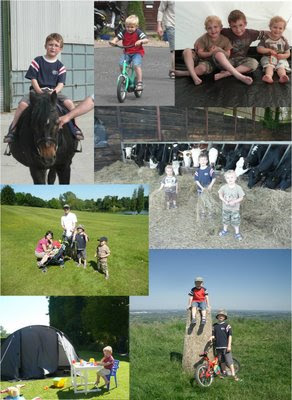 Posted by Christian Bookshop Ossett at 21:29 No comments: