No it's not my CV, just the pacy title of a book new in from the US which I've just finished reading. Written by Collin Hansen, an editor of Christianity Today, it is absolutely fascinating. One feels to be looking in on something a world away from where we are, not just across the Atlantic. The thesis is that a movement, if not a revival, is taking place in America, and the doctrines of grace or Reformed theology or Calvinism (terms used synonymously by Hansen) have come to prominence again. This is particularly noticeable amongst the younger generation, fed up with 'seeker sensitive' evangelicalism. It becomes evident that Hansen can identify with this personally, and this fires his sympathetic treatment of the issue. In true journalistic style he embarks on a geographical and religious tour of research. It turns out to be a very thought provoking journey, well described, well written and never dry. He goes to the epicentres of the new Calvinism and interviews most of the main figureheads. You get a real feel for the characters who are just names over here. I certainly feel that this is essential reading for anyone involved in book buying decisions in the christian book trade (not that that counts many folk in!) In any case it enables you to orient yourself with regard to the contemporary American scene. He goes to Minneapolis to see John Piper's set up, Louisville KY to Al Mohler jnr's Southern Baptist Theological Seminary, Seattle to Mark Driscoll's colourful Mars Hill church, Washington DC to Mark Dever's more sober one. R C Sproul, John MacArthur, C J Mahaney, J I Packer, Tom Ascol, Steve Lawson, Sam Storms...the list goes on! Some are interviewed more fully, but MacArthur refused. But Hansen digs deeper and chats to 'ordinary' people, and this is where some very remarkable stories are unlocked. Of real hunger for the scriptures, re-discovery of the puritans and Jonathan Edwards, bold ministry and great numerical success. I sincerely hope there is a real work of God in the new Calvinist network. I'm by no means persuaded by everything Hansen uncovers, but he finds enough to hold up such a hope. Take the refreshing attitude and maturity about the following excerpt from a conversation with Joel Brooks, who is ministering to students on campus in Birmingham AL, reflecting on the folly of some doctrinal controversialists:
"...they go full steam into arguments with others over the sovereignty of God because they think God's glory is at stake," Joel said. "But arguing over this actually defeats the very belief that God is the one who sovereignly changes hearts and the will. By arguing, you prove that you don't really believe the things you clam to believe.
"Humility," Joel said, "acknowledges that we all need sovereign grace in our lives, and this glorifies our God."
Young, Restless, Reformed' is published by Crossway for £9.99.
Jeremy
Posted by Christian Bookshop Ossett at 19:24 No comments: 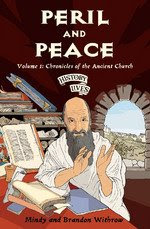 The blurb on the back of this book reads... 'Let history come to life - just the way it should do', and I think it certainly fulfills that. Intended for 9-14 yr olds, I have been reading this to my 5 yr old and he has been enthralled. 'Peril and Peace - Chronicles of the Ancient Church' is fictionalised Church History. It begins right back at the Apostle Paul and his shipwreck on the island of Malta. Although some readers may be slightly uncomfortable with fictionalisation of a Bible passage, it moves quickly on to Polycarp, Augustine and many other 'greats' in the history of the ancient Church. The biographical chapters are interspersed with shorter chapters outlining other issues pertinent to those times. With timelines, maps and bibliography this is a great resource for children and should certainly drum up some enthusiasm for a subject that is often seen as dry and 'boring'.
'Peril and Peace' is just the first book in the History Lives series. The fifth has recently been published and brings us right up to the present time.
Peril and Peace - Chronicles of the Ancient Church
Monks and Mystics - Chronicles of the Medieval Church
Courage and Conviction - Chronicles of the Reformation Church
Hearts and Hands - Chronicles of the Awakening Church
Rescue and Redeem - Chronicles of the Modern Church 1860 AD - Tomorrow.
Each by Mindy and Brandon Withrow, £5.99
Highly Recommended!
Lorna
Posted by Christian Bookshop Ossett at 21:52 No comments: 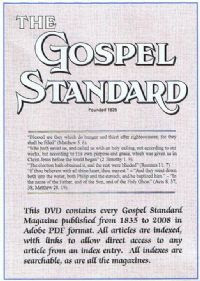 This is a valuable resource. The Gospel Standard (GS) is one of the oldest 'living' monthly magazines in existence, and on this DVD is every one going back to the beginning in 1835, so there is much here for the historian. The development of a Strict Baptist denomination is discernable in the tone and style of the editorials. This DVD also gives the capability to enable the theological student to pursue doctrinal themes of interest, and to examine primary sources rather than relying on hearsay. It is particularly good to see some of the older, rarer magazines reproduced in a searchable pdf format. When the GS magazine first appeared it was also entitled 'The Feeble Christian's Support'. That experiential (or experimental) aspect has always been a hallmark, so much timeless material can still be read and appreciated by those who simply want to feed on the doctrines of sovereign grace today.
Its appearance is one of the best things the GS Trust could have undertaken to do. It fills a big gap, but costs £35, although this is very comparable to AGES software productions for example.
Jeremy
Posted by Christian Bookshop Ossett at 21:44 No comments:

Wash me, and I shall be whiter than snow

"Purge me with hyssop. Sprinkle the atoning blood upon me with the appointed means. Give me the reality which legal ceremonies symbolise. Nothing but blood can take away my blood stains, nothing but the strongest purification can avail to cleanse me. Let the sin offering purge my sin. Let him who was appointed to atone, execute his sacred office on me; for none can need it more than I.
The passage may be read as the voice of faith as well as a prayer, and so it runs -- "Thou wilt purge me with hyssop, and I shall be clean." Foul as I am, there is such power in the divine propitiation, that my sin shall vanish quite away. Like the leper upon whom the priest has performed the cleansing rites, I shall again be admitted into the assembly of thy people and allowed to share in the privileges of the true Israel; while in thy sight also, through Jesus my Lord, I shall be accepted. Wash me. Let it not merely be in type that I am clean, but by a real spiritual purification, which shall remove the pollution of my nature. Let the sanctifying as well as the pardoning process be perfected in me. Save me from the evils which my sin has created and nourished in me. And I shall be whiter than snow. None but thyself can whiten me, but thou canst in grace outdo nature itself in its purest state. Snow soon gathers smoke and dust, it melts and disappears; thou canst give me an enduring purity. Though snow is white below as well as on the outer surface, thou canst work the like inward purity in me, and make me so clean that only an hyperbole can set forth my immaculate condition. Lord, do this; my faith believes thou wilt, and well she knows thou canst.
Scarcely does Holy Scripture contain a verse more full of faith than this. Considering the nature of the sin, and the deep sense the psalmist had of it, it is a glorious faith to be able to see in the blood sufficient, nay, all sufficient merit entirely to purge it away. Considering also the deep natural inbred corruption which David saw and experienced within, it is a miracle of faith that he could rejoice in the hope of perfect purity in his inward parts. Yet, be it added, the faith is no more than the word warrants, than the blood of atonement encourages, than the promise of God deserves. O that some reader may take heart, even now while smarting under sin, to do the Lord the honour to rely thus confidently on the finished sacrifice of Calvary and the infinite mercy there revealed."

Quoted from 'The Treasury of David, Classic Reflections on the Wisdom of the Psalms' by C H Spurgeon, 3 vol set, £39.95
Lorna
Posted by Christian Bookshop Ossett at 12:17 No comments: 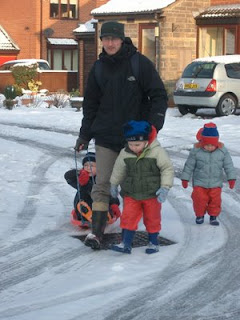 It's a struggle, but we are managing to make it to the shop in these arctic conditions! The boys think it's great riding the sledge to the shop and having a whole carpark of snow to play with... 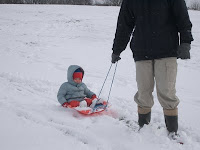 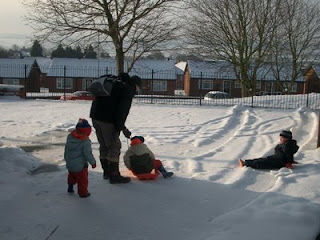 Posted by Christian Bookshop Ossett at 21:51 No comments: