This little booklet was published by Gospel Tidings Publication in 1978, sold out long ago, and has now been reissued in response to demand.
The preface assures us that this is indeed a true story, which has been questioned by those who doubt the reality or power of the Holy Spirit. It was translated from German in the mid-1800s and gives the account of the remarkable conversion of Thirza, a young Jewish woman and her parents, traced back, as far as the means goes, to the words of Matthew 11:28 and 1 John 1:7. These were brought back to memory from her very early schooldays spent at a Christian school. What a salutary reminder this is that we should never be discouraged in the endeavour of spreading the word of God! Thirza's father, though a devout Jew, had allowed her to go to a Christian school thinking that she was too young to receive any serious impression from it. But these gracious words were planted like a seed not only in her heart, but that of her mother also, and sprang to life at the appointed time. Thirza was immediately disinherited by her father on hearing of her conversion, but even this could not prevent God's working in his soul and he eventually was glad of her help when brought under conviction of sin.
The subtitle of this story is 'The Power of the Cross' and how evident that is here! But there is also much profitable reflection within the account provided by the translator, Elizabeth Maria Lloyd, on true spiritual experience. This has application beyond the pages of this booklet, and is certainly not unique to this family, thanks to the grace of God.
The many scriptural quotations are from the Authorised Version. Recommended.
Jeremy
Thirza by Elizabeth Maria Lloyd, published by Gospel Tidings Publications, £1.95, booklet.
Posted by Christian Bookshop Ossett at 22:35 No comments: 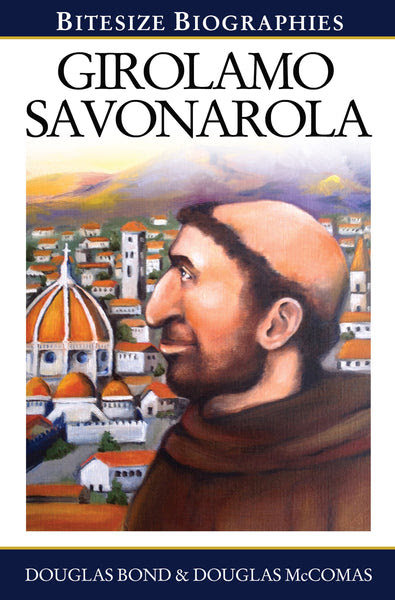 It is good to see something in print on this lesser known pre-Reformation figure. Girolamo Savonarola (1452-1498) was rooted in the Medieval monkish traditions, but he thundered out his denunciations of a corrupt Church and Pope from his pulpit in Florence. He blazed a trail which men like Martin Luther in the next generation would follow and develop. Indeed Luther pays tribute to him:
'Although some theological mud still adhered to the feet of that holy man, [he] nevertheless maintained justification by faith alone without works, and he was burned by the Pope.'
Sadly this was indeed his end, the result of criticising moral corruption too strongly and publicly. He presented a scriptural challenge to the Renaissance humanists and their proud culture in a city where artists of legendary fame were legion. He also grieved over the Church of Rome, evacuated of the gospel of Christ, consumed by worldliness and guilty of tyranny over the consciences of the people. Savonarola spoke boldly, not in Latin, but in the Italian that they could understand. Moreover he extended his reach by a farsighted adoption of the emerging technique of the printing press. Remarkably, he was the most widely published author of the fifteenth century, with editions of his sermons in French and German.
In those days a biblical message of judgment, repentance and grace as the sinner's only refuge could lead to no other conclusion but elimination. Thus Savonarola suffered a martyr's death. Yes, we can see many faults in him, but he has much about faithfulness to teach us, and we delight in his gospel witness in such dark days of church history.
Anything written by Douglas Bond is worth reading, but this book was slightly disappointing. Maybe it is the consequence of a co-authored book, because the material seemed awkwardly arranged in places. Nevertheless it is clear and straightforward as befits a title in this generally excellent Bitesize Biography series.
Jeremy

Last night we had one of our ladies events, and today I am bleary eyed! When you don't close the shop doors until after 11pm you have to take this as a good result! So, what do we do at these events? Laugh, drink tea, eat cake, read and discuss books.  If you couldn't join us, here's what we discussed...

We kicked off with a quote from Sinful Speech by John Flavel (one of the pocket puritan series):


How long does an idle word, or foolish jest, stick in men's minds, and become an occasion of much sin to them?  The froth and vanity of your spirit, which your tongue so freely vents among your vain companions, may be working in their minds when you are in the dust, and so be transmitted from one to another.

Hard hitting and to the point - but that's the Puritans for you. 'I need that' was the immediate cry from one of the ladies, and it was quickly snapped up.

Next book up was First Wives' Club by Clare Heath-Whyte.  The history buff present was very enthusiastic about this book - well written by another history buff, it draws lessons from the lives of 6 sixteenth century women.  With points for Bible Study at the end of each chapter, it could prove useful for ladies meetings?

We talked about the new book by Courtney Reissig called The Accidental Feminist. This takes a look at how feminism has become so prevalent in our culture that many of us have imbibed the feminist principles without question and need to re-examine the Biblical roles for womanhood.  One of the ladies was concerned that it was being counter-cultural for the sake of it.  Only having read half of it I couldn't really answer that one, but someone bought it so we're hoping for a full review next time!

A provocative quote from A Woman's Wisdom started off some more discussion...


The wild fluctuation of hormones at certain times may challenge our tolerance of others or depress our outlook, but nowhere does the Bible gives us a hormonal pass on the call to kindness, patience, contentment, joy and love.

A collective intake of breath while everyone counted to ten... and then admitted that perhaps they had at times failed on that one. The author of this book, Lydia Brownback has also written a series of smaller books On the Go Devotionals, which many of the ladies had read, so interest grew for A Woman's Wisdom, which is a more in depth look at Proverbs. Perhaps Miss Brownback had a point!

Spurgeon's Sorrows by Zack Eswine was another popular choice - with many Spurgeon lovers present and a very enthusiastic reviewer of this book who highly recommends it to all who suffer depression and their carers ('and anyone else in fact').  Spurgeon suffered severe bouts of depression throughout his life but always viewed it as a precursor to greater blessing.  To encourage he says...


Depression of spirit is no index of declining grace; the very loss of joy and the absence of assurance may be accompanied by the greatest advancement in the spiritual life... we do not want rain all the days of the week, and all the weeks of the year; but if the rain comes sometimes, it makes the fields fertile, and fills the waterbrooks.

Awaiting a Saviour by Aaron Armstong, was another that sparked off some discussion.  Poverty and sin - what is the relationship between them?  Aaron very firmly asserts that poverty is in the world because of sin, not the sin of the poor people, but original sin. The discussion ranged over a few topics, but eventually the lady who didn't like the sound of the book, bought the book to give Aaron a fair hearing - I look forward to finding out if he persuaded her to change her mind!

Now, I am not one for verbal diarrhoea, but I have been accused many-a-time of written diarrhoea so let me wrap this up!  Just quickly, some of the other books that we were discussing were...
Far Above Rubies - Lynette Clark
A Little Bird Told Me - Timothy Cross
Treasuring Christ When Your Hands Are Full - Gloria Furman
To Honour God - The Spirituality of Oliver Cromwell - Michael Haykin
When World's Collide - R C Sproul