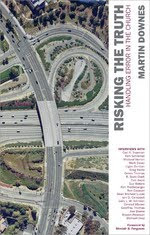 This is an unusual book, and not just because the front cover is the kind of thing only highway engineers can appreciate! The contents are also fairly specialist - though compelling I found. This is partly because of the way in which they have been derived. Martin Downes (a new face) has conducted a whole series of interviews with a 'star studded cast' of evangelical and reformed church leaders. The result is a book (slightly obscurely) called 'Risking the Truth' published by Christian Focus Publications for £8.99 p/b. The book is laid out in Q & A format and it is fascinating to see the way different men deal with the same questions. These all revolve around error and the way in which it should be dealt with. Downes sets before his interviewees such things as: Have they been personally tempted away from the straight and narrow? Confronted pastorally by error? How can heresies be headed off? What advice would they pass down to young ministers from their experience? So you have got men like Geoff Thomas (Wales) alongside Iain Campbell (Scotland), Michael Ovey (England), Conrad Mbewe (Zambia), Joel Beeke (USA) plus a load more Americans. One theme (sub-theme?) that struck me was a repeated lesson learned from experience - the vital need to maintain personal prayer. All that is done publicly and ministerially cannot substitute for it. Without it one will not be a 'tree planted by the rivers of water' (Psalm 1) and be fruitful in word and example.
Posted by Christian Bookshop Ossett at 14:46 No comments:

On the Road Again

Please come and see us at the Christian Values in Education (CViE) Midland regional meeting this coming Saturday (20th February). We have been kindly permitted to take a bookstall there. CViE material has been made freely available in our shop since the inception of CVE - as it was first called. The difficulty for us is not what to take, but what not to take! We expect the event to be well attended and hope it will be a win-win situation for CViE and us. The subject is on the Dangers of Drug and Alcohol Abuse. Two speakers will represent the police and teaching professions. For families with younger children there is a separate interactive meeting for 5 - 10 year olds. For full details go to http://www.cvie.org.uk/Events.aspx
The venue is Weddington church hall, near Nuneaton. Kick off is 3pm. We would love to see you there.
Jeremy
Posted by Christian Bookshop Ossett at 21:08 No comments: 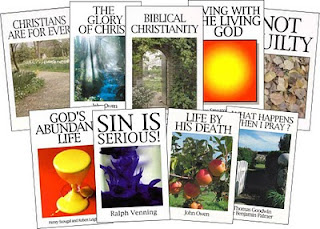 The February offer is up and running - it's a good one, so you may need to run to catch it! All of the 'Great Classics Series' by Grace Publications are being sold on a '3 for the price of 2' offer. This series covers a good range of the writings of the Reformers and Puritans in abridged and simplified editions. The prices are good too - the cheapest being £2.50 and the most expensive only reaching as high as £5.95. Read our February Bulletin and you will see the full list of titles available in this series.
Lorna
Posted by Christian Bookshop Ossett at 21:53 No comments:

What an interesting and unusual name! I wonder how many people now have even heard of him. But his 'Exposition of Psalms' in 2 volumes has just been deemed worthy of being republished by Particular Baptist Press (PBP). It follows on in their Newport Commentary series from 1 John, also by Pierce (see 2nd from left on bookshelf picture above). But the Psalms volumes were 'very scarce' when C H Spurgeon commended it in his famous and comprehensive 'Commenting and Commentaries' in the 1800s. I was told by PBP that they had only managed to locate one old copy in the US to do their publication from. I have obtained some sets of this quality bound limited edition for £59 per set.
Samuel Eyles Pierce (1746 - 1829) ministered for some time in the west country, particularly Truro, before ending up as pastor of the Baptist church meeting in Shoe Lane, London. He was first in the Church of England, being greatly blessed under the ministry of Augustus Toplady and then William Romaine. Then he became an Independent and trained at Lady Huntingdon's college for ministers at Trevecca for 4 years. But finally he became convinced of believer's baptism. In all his writings he is very full of Christ, insisting that the believer must moment by moment be depending on him, as nothing but sin and unsoundness even in the most earnest endeavours is found within the heart. "Christ is all, and in all" is his motto, and this dictates his approach to the Psalms.
There is a lovely story which is very telling of the spiritual relationship between Pierce and Robert Hawker (Vicar of Charles in Plymouth) :
On Dr Hawker's last visit to London, he was accosted by a gentleman on his leaving St Ann's, Blackfriars, who lamented his return home. The Doctor replied, "My dear sir, I shall not take the gospel with me." "Where," said the person, "would you advise me to go to hear it?" The Doctor rejoined, "Go and hear Mr Pierce, at Shoe Lane. Not that I mean to put myself on a level with that man of God, still I hope I am hobbling after him, though at a great distance." (from J A Jones in the preface to an 1862 edition of Pierce's 'Letters on Spiritual Subjects')
Jeremy
Posted by Christian Bookshop Ossett at 11:48 No comments:

Our new website is taking up quite a bit of my time and energy at the moment. I enthusiastically demonstrated our 'beta' version of it to a friend the other day, extolling the virtues of the improved search engine, increased product information, and (most importantly from my point of view) the simplicity involved in keeping it up to date when she said 'Aren't you just giving everyone all the information they need about a book for them to go and buy it cheaper elsewhere?'. Gulp. Uur. Well, I suppose you could look at it like that. Actually, why don't I just shut up shop now and leave the bookselling to Amaz... all those other online retailers?
I don't, purely because I think we can provide a better service. We have a phone number for one thing and many customers will ring for advice about their choice of book, we are happy to source hard-to-find books, we take bookstalls out to special events, we even allow customers to take a box load of books to look through/discuss with Church leaders and then buy some and return some. We have specialist knowledge in our own niche of Christian books and enjoy discussing the finer details of particular titles. I could go on and on... about the mail order customer who buys books obsessively and so for his own well being we tactfully try to limit his purchases... about the 'mad monk' who pops in and likes to discuss the details of Calvinism over Roman Catholicism... about the little old lady who phones for a couple of greetings cards and insists that I describe the picture in detail and read every part of the greeting out to her... about the grumpy local chap who calls in regularly but rarely buys anything. Surely, surely it is worth staying open for that! Okay, so we can't always compete on price, but I'm pretty sure we can compete on service. Try us!
Lorna
Posted by Christian Bookshop Ossett at 21:16 No comments: