To Know and To Be Known
Have a read of this article written by the popular American blogger Tim Challies.  I think it a very good analysis of the nature of purely online relationships.  It is easy (and tempting) to go out and seek to impress the many, but it is the opinion and advice of the few who truly know us which really matters.  Otherwise we begin to believe our own virtual image, and idolise ourselves.  'If a man think himself to be something, when he is nothing, he deceiveth himself' (Galatians 6:3).  That's a motto I have had written on a yellow sticky next to my desk for many years now.  What perfect biblical wisdom!  The humble walk safest and surest.  Lorna and I are very conscious of these matters as we run blogs relating to the Bookshop, and have now launched out into the deeps of a facebook page:-
www.facebook.com/pages/Ossett-United-Kingdom/Christian-Bookshop-Ossett/208558682504427
Perhaps we make things look and sound too rosy here.  The gritty reality is that it is hard work, for which we are untrained, often mundane, routine and yet unstructured every day, creatively wearing, and busy so much that there is no time to read!  Talk about frustrating!  If it were not that we are persuaded of God's care, we would say that it is a very precarious business to be in.  That's not to say we would rather be elsewhere - there are many compensations - but perhaps it helps close the gap between appearance and fact.
Jeremy
Posted by Christian Bookshop Ossett at 21:43 No comments:

The boys and I have recently had some fun making the Tabernacle model from this book in the Candle Discovery Series.  I think it's a great way to really fix in the mind the proportions & details of the Tabernacle and the significance of each area.  This book not only includes the cardboard model (all die-cut, so just glue needed to make it) and lots of info about the Tabernacle, but also a brief history of the Israelites from Abraham to David. Really worth £6.99. Lorna 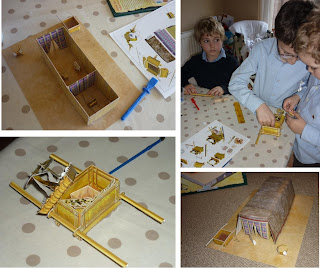 Posted by Christian Bookshop Ossett at 23:13 No comments:

The 21st century evangelical world has been sent reeling by the emergence of a heresy hitherto perceived to be the province of liberal scholars.  It is no less than the denial of Christ’s real, personal suffering under the wrath of God for the sins of his people upon the cross.  At Easter time particularly the true meaning of the cross needs to be affirmed ie. Substitutionary Atonement.  In the first part of this book the three authors from an evangelical Anglican background set out to make plain how definite the teaching of the Bible is upon this subject.  To lay the foundation some Old and New Testament passages are closely examined.  Then the theological framework is put in place, and the views of some major figures in the history of the church consulted.  The second part consists of ‘Answering the Critics’, thus making the book very helpful, though unashamedly controversial in the best sense.  A must have for pastors, elders and the concerned person in the pew.
'Pierced For Our Transgressions' by Jeffrey, Ovey & Sach. Published by IVP.
RRP £17.99, but we have 2 on offer at £12.99.
Jeremy
Posted by Christian Bookshop Ossett at 23:26 No comments: