At the outset it must be acknowledged that this book may well not circulate widely outside of those of a particular Particular Baptist persuasion(!)  But a fresh treatment of the doctrinal position of the denomination called Gospel Standard (GS) Baptists is welcome to me.  And this is the first of what promises to be an excellent new series on the GS 35 Articles of Faith, reinvigorating the Gospel Standard Trust's publication list.  Ken Matrunola has a clear, easy to read style.  This is remarkable in view of the fact that his contribution to the book was originally given as a lecture in the late 1980's, and has been transcribed without being edited.  He addresses the subject of the need for Confessions of Faith initially, before going on to an examination of Article 1, regarding the Bible.  In a brief reference to the history of Particular Baptist Statements of Faith, and of the rise of the GS Articles, he notes that further research was desirable as to precisely how the latter came to be constituted in their present form.  This has been amply supplied in an Appendix which is longer than the lecture!  Here Timothy Abbott brings documentary evidence from an extensive enquiry into this matter.  Much is referred to, but more important matter has been reproduced, thus bulking out the Appendix.  This is good for those who desire to dig into it deeply - but it needs to be read selectively (at least at first go!) in order for the thread not to be lost.  A tip here is to focus on the italicized portions.  The clear stamp of William Gadsby's theology placed upon John Gill's initial contribution is conclusively shown to be fundamental to a correct understanding of the GS Articles.  This has considerable implications for the denomination as a whole, particularly in drawing a clear line of demarcation based upon doctrine rather than upon tradition.  It should cause major heart-searching for both young and old in GS churches, but probably won't.  Anyway the quote from William Gadsby at the end really is worth the modest price of the book alone!
'Articles of Faith. Why and where from?' by Ken Matrunola and Timothy Abbott. Gospel Standard Trust Publications. £5.50.  Just out now - they haven't yet got it showing on their website (as of today).
Jeremy
Posted by Christian Bookshop Ossett at 23:08 No comments:

Helen Roseveare is a very practical & down to earth writer.  She is so honest about her failings in her Christian walk it becomes easy to admit to yours.  In this book she has challenged me again. The general thesis is that Christ is enough to fulfil all our needs.  Sounds obvious and I'm sure we all know the theory and the scripture texts to prove it.  But do we really live it out?  Really?  Honestly?
What about all those 'respectable sins' - worry, perfectionism, that ever-so-small feeling of discontent, the grumbling about the weather, impatience, moral superiority - we may talk about them as little weaknesses or failings but they are certainly not very Christ-like. How longsuffering our Lord is!  Do we really rely on Him to know what is for our real good?
What about that sneaky 'Jesus... plus'?  If we could just be successful in this situation, if only God would provide a spouse/a new house, if only those around me would respect me more, life would be so much better.  Since when was Jesus and Him alone not enough for our complete happiness? 'The joy of the Lord is your strength' (Nehemiah 8:10).
These 'not enough' errors that Helen talks about are so subtle, but ring horribly true. Suddenly I have become more aware of far too many of them tucked away in my own heart where no-one would necessarily see them - except a Holy God of course.  This is very humbling and could lead to feelings of despair of never being good enough - but Helen deals with this too.  Indeed we fall far short of pleasing our Heavenly Father, but the death of Christ is enough to cover all our sins.  Enough.
This is a book that I found searching and profitable.  It's only small and takes less than an hour to read through.  Buy it and digest.  In fact don't bother buying it - the copy I picked off the shelf in the shop has since had tea spilt on it (an over-enthusiastic little helper!) so I'm happy to give it away free. All you need to do is 'like' us on our facebook page (or get a friend to like us if you don't have a facebook account), then let me have your address & its yours for keeps!
Lorna
Enough.  by Helen Roseveare, published by Christian Focus, £2.99
Posted by Christian Bookshop Ossett at 23:18 No comments: 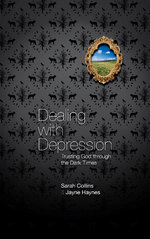 Books on depression depress me, as I often facetiously remark.  Firstly, as a bookshop manager deciding what to stock, there is too much choice on this subject.  The 'Christian Life' section could be chock full of them! Secondly, and more seriously, I actually find them disturbing to read.  They draw out depressive tendencies, and poor old Lorna has to bear the brunt of a storm of self analysis...
The reason for stocking this book is that the read is neither too complex nor too long.  It arose out of a series of seminars in which the two authors brought their different skills together (medical and social sciences) to address a problem they felt was far too overlooked amongst Christians.  You will not be blinded with science here - the book helpfully gives a guide to further reading on the subject, along with details of some useful internet resources.  So, with a lot of the 'heavy' material handled like that, it leaves the book just about right for both sufferers and helpers of this terrible affliction.  It is shocking to learn that depression is now the third most common reason to consult a GP in the UK.  This 'black dog', as Winston Churchill called it, is not of necessity a spiritual malady, but neither can it be rightly considered outside of a biblical framework.  That balance is struck here and brief, constructive lessons are brought out from the Psalms and other places in the Bible where the sovereignty, wisdom and care of God is displayed.  Another feature of the book is that at the end of each chapter there is a feature piece about different people's own experiences.  This culminates with an extended testimony from the well known Yorkshire based evangelist Roger Carswell.
Overall, 'Dealing with Depression' by Sarah Collins & Jayne Haynes is a great little book.  It has just been published by Christian Focus Publications at a price of £4.99.  We are currently running an offer on it for £3.50.
Jeremy
Posted by Christian Bookshop Ossett at 19:36 No comments:

August - A Wash Out?

Lorna has just posted about our Annual bulletin.  Yes, the boys were a great help, but it went off a bit late this year.  What happened to August?  Did we get anything done apart from a family holiday?  Well, strangely, it was a great success.  Looking at the month from more than the narrow commercial perspective, it was one of our best times.  We held two holiday activity mornings for pre-teen children plus parents, which were runaway successes.  They were begging for more!  It was so satisfying to get across a literary theme through crafts and quizzes as well as book readings.  More than 60 children were there which was fabulous.  It was particularly nice to see many from non-Christian families.  We were kindly allowed the use of the Chapel next door to give us the needed space, and had a great support team as well.  Thanks everyone!  We have a gallery of photos on our Facebook page.  Remember you can view this even if you do not have a Facebook account.
The problem now is that we have probably made a rod for our own back for future holiday times, and left ourselves playing catch-up as we start the long run in to Christmas!  But at least we do so feeling more fulfilled than ever.
Jeremy
Posted by Christian Bookshop Ossett at 22:30 No comments:

With a little help from my friends... 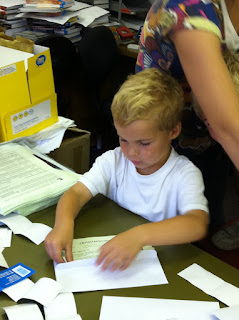 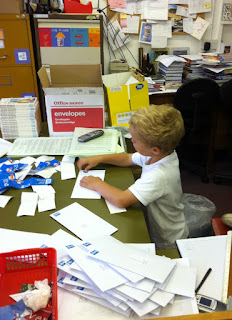 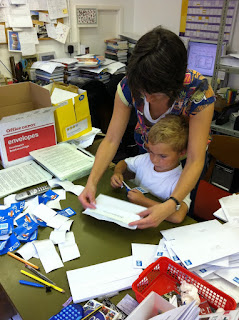 One more job ticked off the list - perhaps now we can get back to blogging more regularly!
If you haven't received a copy of our annual news bulletin by post or email have a look at it on our website... http://www.christianbookshopossett.co.uk/Bulletin.pdf (tons of news about secondhand books, ebooks, social networking, 2012 Calendars, Charity Christmas Cards & more).
Lorna
Posted by Christian Bookshop Ossett at 20:54 No comments: