Our latest eBulletin has been sent out with some new reading recommendations & offers... 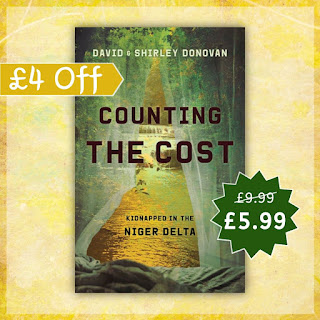 In particular this book 'Counting the Cost' has been proving popular and is well reviewed.  It is a sober and inspiring testimony of God's help and grace given while enduring the most terrifying ordeal.  British missionary doctors David and Shirley Donovan were taken hostage with two others by a crazed gang in Nigeria and held to ransom.  Their gripping story is interwoven with their search for meaning in it, and what they came to learn of the sovereignty, yet nearness, of God through it.  It challenges the flabby Christianity too often evident today, and is a humbling and searching book to read, and to confidently recommend to others.

Have a read of our eBulletin here.

If you would like to receive these emails regularly please let us know or just sign up on website homepage.
Posted by Christian Bookshop Ossett at 11:51 No comments:

God Sings! (And Ways We Think He Ought To)

The curious title of this book reflects Zephaniah 3:17, which reveals that God in some sense sings with joy over his people.  Douglas Bond has turned back to non-fiction again in this his latest book, and is concerned with how and what the church should be singing back to God in worship.   He has clearly thought long and hard, and visited many churches, to research this issue, which has great practical impact right across all denominations.  Bond is a hymn enthusiast with a love and appreciation of music.  But he is not concerned with merely lobbing grenades over the divide between those who favour contemporary worship music, which has had a huge take up in the last few decades, and those who hold to traditional hymn music.  Even though it becomes apparent that he comes down on the side of the latter, his concern is rather with genuine enquiry than with recrimination.  A compelling part of his investigation is his concern to analyse the church music scene using biblical principles.  Hence Bond critiques ‘high art’ music as well as ‘folk art’; ‘solemnity’ as a criteria for hymn singing as well as 'emotion'; psalm-only convictions as well as culture-sensitive ones.  However, as this is achieved in his lively and familiar style of writing it doesn’t feel too intense to be useful in a book of this size and purpose. In following out his view of hymn composition as the most exalted form of poetry, he gives profitable space to the analysis of some of Isaac Watts’ and Augustus Toplady’s hymns. And he justifies his concern over contemporary lack of formal poetic education, and the way music takes priority over words, by taking a look at one of the most successful modern worship songs, '10,000 Reasons' by Matt Redman.  Just one gripe I have with this book is that it is not well edited in my opinion.  Only at the end of the book where the acknowledgements are placed, does it become clear that it began life as a series of articles and lectures over a period of years.  This explains the small degree of repetition, but it is regrettable nevertheless. But don’t let that itch put you off - this is a good theological guide to the sung praises of God.
God Sings! by Douglas Bond, Scriptorium Press, £11.99
Posted by Christian Bookshop Ossett at 09:35 No comments: