Despite Lorna hastening us on into May already, I would remind you that there is enough of April yet to pick up a bundle deal.
Bundle 1 : John Bunyan is a super option at just £12, saving around 15% on the cost price if the 3 books were bought individually. It has been carefully put together for the younger age range, as an introduction to the 'must-read' man. You have the whole of Pilgrim's Progress as well as the Holy War in the bundle, together with a easy biography from the Lutterworth Press 'Faith and Fame' series.The classic books are by no means merely childish just because they have been put into modern English. Of course nothing can match the original for literary style, but at least the truths Bunyan was wanting to communicate through his metaphorical artistry remain. Another group who might benefit from these books are those for whom English is a second language. This is increasingly so in our society.
Get in there quick!
Jeremy
Posted by Christian Bookshop Ossett at 09:31 No comments:

Thinking Ahead to May

I can't forget that May is fast approaching... Matt keeps reminding me... could be something to do with the fact that it's his birthday on the 4th... he'll be FIVE! Wow, don't the years fly by! We have been planning our May promotion for a while, and building up stocks of the one most important book in our shop - the Bible. Yes, May is to be our Bibles month. 20% off all TBS Bibles, and 10% off all the other publisher's Bibles - KJV only. With the huge number of different Bible translations out there, we are not ashamed to wholeheartedly promote the KJV as the most reliable translation. In fact, in my 'surfing' this evening, I came across this very interesting blog - someone else who also feels there is too much choice of versions and styles out there...
'...here in the English speaking world we not only have so many different translations that we now need other books to help us choose between them, but we seem to have either another translation or another super-duper hip-hop trendy hot-water-bottle-wrapped must-have fashion accessory edition published every week.'
Read the whole of the post here http://christianbookshopsblog.org.uk/2008/04/26/bibles-and-bookmarks/
Lorna
Posted by Christian Bookshop Ossett at 20:04 1 comment:

I'm sure this is a war cry increasingly heard these days... Poor old Dr John Gill does get plenty of undeserved stick, especially from those who want to displace him from being the best theologian the Particular Baptists have had in favour of Andrew Fuller. A high view of the sovereign grace of God hurts the pride of Man. If the doctrine is not absolutely denied, it must be talked down and the pivotal point in saving grace shifted to the sinner's duty. So all evangelistic effort is expended to get Man to do his duty and be converted. But Christ said 'I, if I be lifted up from the earth will draw all men unto me', showing divine determination to save all that the Father gave to him. The Good Shepherd knows his sheep, and blesses the preaching of the gospel to be the infallible means of gathering them. This is what Gill stood so staunchly for, and with an ability that has given him a lasting reputation. His writing has been labelled as tedious, but this is because he is thorough. Certainly his output was vast. With this in mind, a small 'taster' from his Body of Divinity on the subject of Justification was published by Gospel Standard Publications a couple of years ago.
Now, I think the Gill Bundle deal we have put together for just £12 (April only) is an ideal package, not only because of the affordability, but because of what you get for your money. It includes the 'Justification' book just mentioned, which gives you a great introduction to his doctrine and style. Get this under your belt and then you can go for his defence of Believer's Baptism by immersion in 'Baptismal Tracts & Sermons'. It's a rare facsimilie edition. Finally you can read a biographical survey of Gill, his work, his times, and his detractors by Dr George Ella: 'John Gill and the Cause of God and Truth'. This is an excellent book for reference material, and you can make up your own mind if you think that perhaps Ella has tried too hard to defend him!
Jeremy
Posted by Christian Bookshop Ossett at 21:25 No comments: 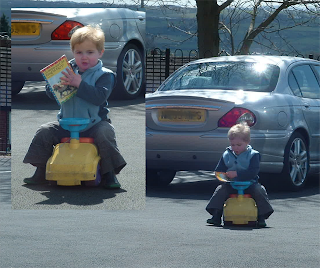 I couldn't resist sneaking out into the shop carpark the other day and taking this snap of Euan. He loves his books - they even go out in the boot of his car with him! This was one of the Lion Story Bible series (which sadly is going out of print). Not surprisingly, we have a particular interest in sourcing decent children's books for the shop and we have a captive audience to try them out on.
Lorna
Posted by Christian Bookshop Ossett at 22:10 1 comment:

Though he was one of the later Puritans, Flavel ranks high as one of the best known among many fine candidates. Of all Puritan writings his 'The Mystery of Providence' has been enduringly popular, although not as 'heavyweight' as some. This is perhaps because he touches upon christian experience with earnest sympathy, and yet with the particular aim of leading the reader to glorify God by meditating upon his providence. 'Divine Conduct' was the original title of this book when printed in 1677. How great he is in working all things, small and great, together for good to all his people! Banner of Truth have this book still in print, last in 2006 with a new cover to accompany the price rise to £5.75 (Puritan Paperbacks series). However, Flavel seems to have become 'typecast' on this one book. Next up offering from Banner is the full 6 vol set of his Works for £85.00 !
Other than this, Christian Focus Publications have done 'Keeping the Heart' in their Christian Heritage series, a practical treatise which they have subtitled 'A Puritan's view of how to maintain your love for God'. Costs £4.99. However this was followed up by Flavel by 'Touchstone of Sincerity' which is about heart searching, and detection of signs of grace or hypocrisy. We can supply this and the previous book from Gospel Mission for £4.50.
Gospel Mission also reproduced 'The Righteous Man's Refuge', written in troubled national times to help 'direct the gracious soul to its rest in God'. This costs £4.95.
For less than £5 each we also stock the two Baker reprints Gospel Mission took over. These are 'The Fountain of Life', all about the person and work of Christ in a heartwarming set of meditations. Then 'The Method of Grace' which does a thorough study in the same vein about the Holy Spirit and his applying of redemption's blessings. Flavel refers to 'gospel offers', but at least he is clear in outlining who he means them to be for - the self-condemned sinner. Also he maintains a high view of the sovereignty of the Holy Spirit's operations upon the souls of men, which is a good antidote to today's epidemic of Arminian teaching within supposed Calvinistic circles.
To come full circle, if you feel you need an easy to read version of 'The Mystery of Providence', then 'God Willing' is an option provided from Grace Publications. Costs just £2.95.
Jeremy
Posted by Christian Bookshop Ossett at 21:28 No comments:

This group of books, new in from Christian Focus, had me interested - finally some sensible books for teenagers covering some 'teenage' issues. However, having now read them I have mixed feelings. I know I was a teenager once, and I hate to admit that I've forgotton how it was, but I'm just not sure how a teenager would find these books. They use a fictional story (all the characters are Christians) as a starting point to discussing some serious issues - suicide, bereavement, conflicts and this is interspersed with factual information about the issues raised and suggestions for dealing with them. Is the fiction patronising? does it give too many American examples? How does it read to a British teenager? Is it helpful? I need a teenager to help me out here. Any teenagers out there willing to read these books and let me know what you think? You can have them all for a fiver if you comment on this blog (normally £2.99 each).
Lorna
Posted by Christian Bookshop Ossett at 13:17 No comments:

We've got six of these to be had during the month of April only. Don't get over excited, I'm not referring to babies - just books! But excitement is still an appropriate emotion when up to 40% can be saved on them.
Each bundle deal consists of three books, all related to a well known person. One of the three is always a biography/autobiography, then another is generally an easier/shorter read, before you get to something to really chew on.
So, in chronological order we have Martin Luther - some interestingly different books related to him. Read about the influence his wife had on him. John Bunyan, where we have made a selection mainly aimed at younger readers. Then the great Baptist theologian John Gill - includes a good little extract on Justification. Next comes William Gadsby, so much more to him than just a hymnwriter. Then stepping up to modern times, an introductory pack to Dr Martyn Lloyd-Jones. Finally, a lady! Faith Cook has written much, but here you get the full mixture. One about herself, one work of fiction, and one about ten less well known christians.
Three of the bundles cost £12 each, and the other three cost £15 each. Go to our website front page and click onto the pdf file there to find out which costs which. http://www.christianbookshopossett.co.uk
Jeremy
Posted by Christian Bookshop Ossett at 21:51 No comments:

When I began to read this book I was disappointed. Somehow it wasn't what I expected from a book with this title. More than half the book is long Scripture quotations which I always question the value of (especially when they are in a version you are not familiar with) - are readers so lazy that they won't get a Bible out?
Half an hour later I had to sheepishly admit, that yes I am probably one of those readers and that by the time I was 2 chapters into this book I realised the benefit of having the Bible passages quoted in full. Leyshon's comments after each quotation are nothing more than an outline of thoughts and considerations on the Bible passage and then pointers for further thought. But they are well thought out outlines, not difficult to assimilate and certainly worthy of careful reflection. I could imagine the book being well used in small Bible study groups - it includes all the material you need. In fact, having now read the blurb on the back of the book - sometimes useful to read before judging the book ;-) , I realise that it is indeed intended for small Bible study groups! So it does do what it says on the (back) cover.
Sickness, Suffering & Scripture by David Leyshon, £5
Lorna
Posted by Christian Bookshop Ossett at 23:29 2 comments: