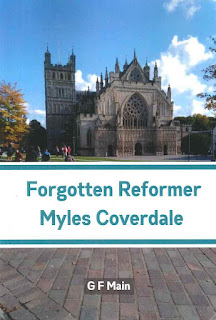 Myles (or Miles) Coverdale is a very significant, but largely overlooked, figure in the English Reformation. From a monastic background, he was among the group of scholars at Cambridge in the 1520s who became influenced by Martin Luther's teaching, most of whom were later burnt at the stake for their beliefs. Coverdale only escaped a martyr's death through the intervention of the King of Denmark with Queen Mary. He was exiled to Europe, ending up at Geneva where he joined John Knox' church and came under John Calvin's influence. Here he assisted in the translation of the Geneva Bible. However his greatest feat of Bible translation work had come twenty years before in an earlier exile, joining up with William Tyndale on the continent, and after his death going on to finish what was the first complete Bible in English after the invention of printing. His life was a series of ups and downs: in different phases he was  Bishop of Exeter, but then a penniless teacher in a school in Germany. Through it all he remained the quiet, peaceable character that he was, combined with steely resolve when it came to matters of conscience. His humble determination to serve God, despite not being the literary genius that Tyndale was, is beautifully stated in his Prologue to the 1535 Coverdale Bible, and concludes with a good motto for every Christian:-

It was neither my labour nor desire to have this work put in my hand: nevertheless it grieved me that other nations should be more plenteously provided for with the Scriptures in their mother tongue, than we: therefore when I was instantly required, though I could not do so well as I would, I thought it my duty to do my best, and that with good will.

This study of Coverdale's life and work gives a real insight into the power and providence of God, bringing about and sustaining the Reformation. It would complement the History GCSE topic on King Henry VIII perfectly, to help young people see the greater spiritual movement that took place alongside the political events of that period.

Posted by Christian Bookshop Ossett at 16:00